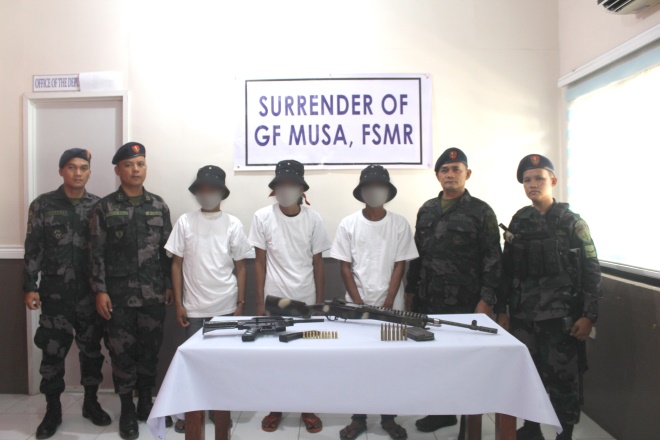 The rebel returnees are identified as follows:

The said persons decided to surrender due to extreme anxiety and psychological pressure as a result of all out-combat operations launched by aforesaid operating units.

PLTCOL BARNEY P CONDES, Force Commander, Regional Mobile Force Battalion 12 said “The surrendered persons of Guerilla Front MUSA, FSMR, it means that the PNP is very serious in the campaign of CTG’s. The red area and white area operations were intensified….The support of our community in our call to end local communist armed conflict is very commendable which leads to the surrender of another three (3) members of NPA Communist Terrorist Group in our area”, says PLTCOL BARNEY CONDES, Force Commander, Regional Mobile Force Battalion (RMFB 12).

In progress, the Regional Mobile Force Battalion 12 is conducting White Area Operation Training (WAOT) to equip the personnel to counter the deceptive tactics of this CTG’s to stop deceiving local folks. This is just a continuation of our efforts to convince them to admit themselves to the government to avail the benefits and enjoy living in a democratic and peaceful life. We will continue to conduct operation on red area likewise in white area. I encourage the local government to support the PNP or AFP but this is a whole of nation approach to End the Local Communist Armed Conflict.”