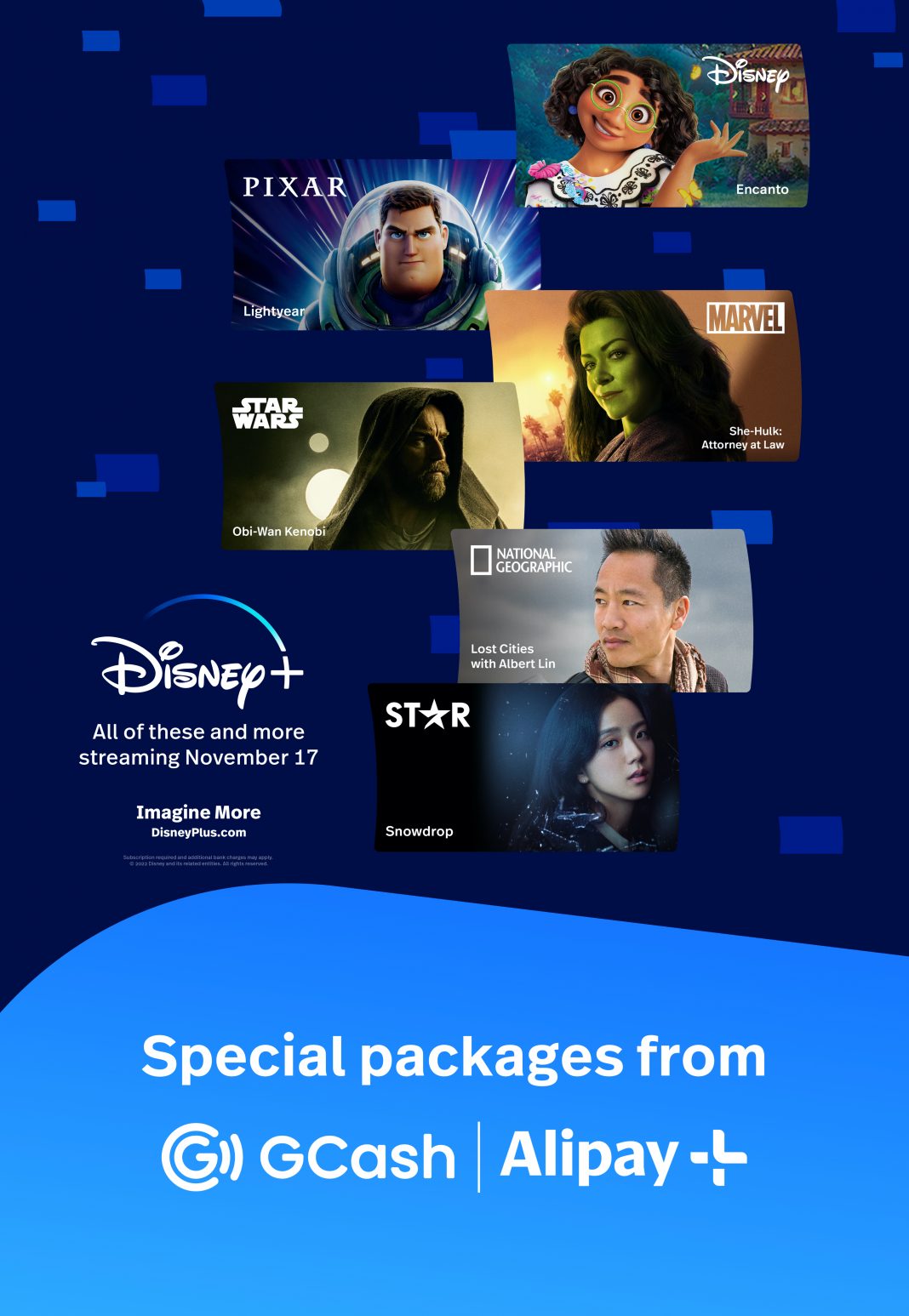 Users of the Philippines’ No.1 e-wallet GCash will be able to use their Alipay+ Rewards for special packages that include subscriptions to the highly anticipated streaming service Disney+

Manila – Ahead of the official launch of Disney+ in the Philippines on November 17, Alipay+ together with its e-wallet partner GCash today announced that it will offer Disney+ as part of a special package to users of the Philippines’ No.1 e-wallet, GCash.

As part of an early bird deal from November 4 until November 16, GCash users in the Philippines with Alipay+ Rewards can sign up for the special package that includes Disney+ annual subscriptions, when they pay with their GCash e-wallet via Alipay+ Rewards on the GCash app.

“We’re delighted that consumers in the Philippines will very soon be able to access our vast library of entertainment content on Disney+ and connect with their favorite characters and stories anytime they want,” said David Shin, Senior Vice President and Managing Director, Southeast Asia, Taiwan and Hong Kong, The Walt Disney Company. “Consumers will be able to stream exclusive originals, blockbuster films, series, documentaries, and incredible content from Disney’s iconic suite of brands and franchises.”

Disney+ is the exclusive streaming home of an ever-growing library of global, regional and Asian language content such as blockbuster films from the Marvel Cinematic Universe to award-winning Pixar animation, to Korean content featuring BTS and other top Asian stars, under the Star brand.

Star also offers renowned movies and shows such as Emmy-award winning Grey’s Anatomy, Only Murders in The Building, The Bear, The Simpsons and The Kardashians. In addition, Star delivers exclusive originals produced in collaboration with producers and directors in the Asia Pacific region.

“As a company committed to delivering more value and choice to our customers, we are thrilled to be bringing Disney+ to consumers to offer access to a great selection of global, regional and Asian language entertainment to consumers across the Philippines,” said Jing Yin, General Manager of Global Strategic Accounts of International Business Group at Ant Group. “With innovative payment and marketing solutions, Alipay+ serves as a cross-border economic connector enabling consumers to make payments on global platforms to enjoy more rewards including world-class entertainment experiences through their preferred digital wallets.”

“Through GCash and Alipay+, Disney fans can enjoy their favorite movies and shows in just a few taps. We recognize this significant opportunity in the entertainment and streaming space and have high hopes for Disney+ in the Philippines market,” said Winsley Bangit, Chief Customer Officer of Mynt – operator of GCash.

After the debut of Disney+ on November 17, consumers in the Philippines can continue to use their GCash e-wallets via Alipay+ to subscribe for the popular global streaming service.