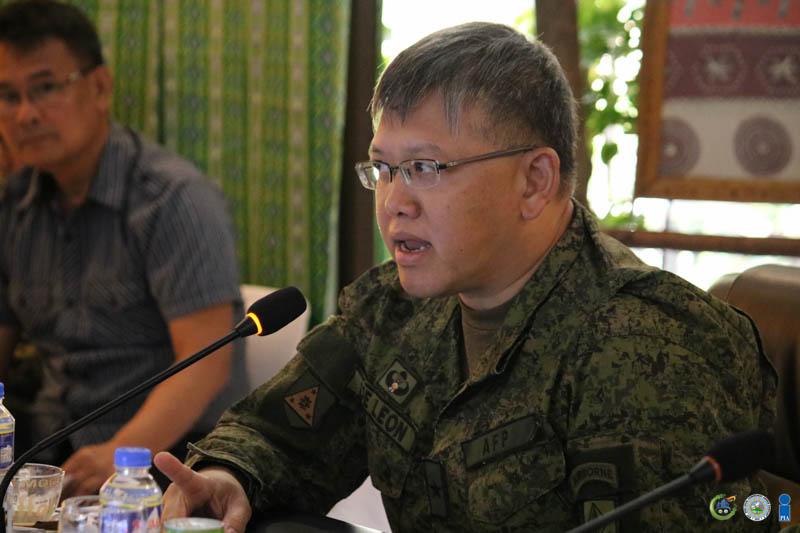 “The NPA members, under the instruction of their leaders, have not stopped from attacking communities. They physically and psychologically harmed civilians which are serious violations of IHL,” De Leon said.

Police reports showed that CAFGU Pedro Omblero, while off from work, was at home when seven armed men barged in about 8:30 in the evening on October 27.

The masked assailants reportedly hog-tied and dragged the victim onto a motorcycle and carried him off to a remote area in nearby Purok 18, barangay Batangan in Valencia City, along with his live-in partner Elizabeth Dela Torre.

In an interview, Elizabeth said she cried and begged for his husband’s life but the gunmen shot him, hitting the head.

“Why, how could they shoot him when we are unarmed and helpless?” she said.

The 33-year-old CAFGU—who was shot in front of his wife—sustained wounds on his left eyebrow and abdomen.

The motorcycle-riding gunmen left the scene and sped off.

The blooded Omblero with gunshot wounds believed to be that of a caliber .45 pistol was rushed to Valencia Adventist Medical Center but was declared dead on arrival at the hospital.

“This case is a grave violation of IHL because the victim was considered a “captive” when seized from home. The International Humanitarian Law says that a captive is not a combatant, thus has the right to life and must be treated humanely,” De Leon said in a radio interview.

The NPA should have respected the CAFGU’s rights enshrined by the IHL as he can no longer be considered combatant because he was already captured, disarmed, and therefore has no capacity to fight off. The CPP-NDF, therefore, must discipline the NPA by enforcing rules to instill self-respect and prompt them to be wary of the IHL provisions regarding the protection of the vulnerable—women, children, the aged, indigenous peoples, persons with disabilities, the civilians, and non-combatants, he added.

In a statement, De Leon said Omblero’s murder by the rebel group bolsters people’s claim that it is the CPP-NPA terrorists who are carrying out extrajudicial killing (EJK), contrary to the allegations of the militant groups.

“We are recommending that the local government of Valencia City creates a Fact-finding Committee on IHL case to investigate this issue. We also ask the Commission on Human Rights to join in the investigation of this NPA-perpetrated IHL violation,” he appealed.

He also urged Karapatan, which pretends to be the watchdog on IHL, to denounce the CPP-NPA and its allies for the growing number of IHL violations and the repeated killings of innocent indigenous peoples and farmers carried out by the NPA in Bukidnon.

The CPP-NPA is listed as a terrorist organization by the United States, the European Union, the United Kingdom, Australia, Canada, New Zealand, and the Philippines.

That’s why there’s a need to support other countries’ declaration that the CPP-NPA is a terrorist organization to mark its real status as it continues to attack civilians and non-combatants in blatant disregard to the provisions of the IHL, De Leon said. (RLRB/PIA Bukidnon)