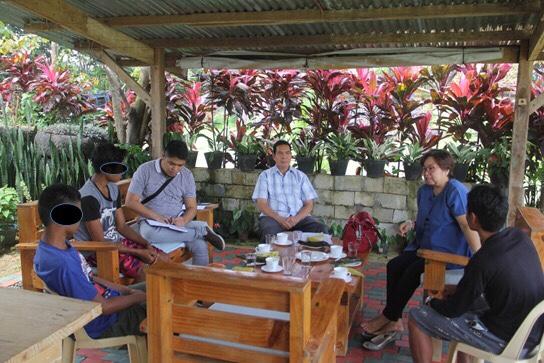 IMPASUGONG, Bukidnon – The 8th Infantry Battalion (8IB) welcomed the visit of the Commission on Human Rights (CHR) to check the status of former New People’s Army (NPA) child warriors who are temporarily staying inside the 8IB camp at Brgy. Poblacion, this municipality.
Representatives from the Commission on Human Rights (CHR) visited the military camp on October 8 and held a dialogue with former minor rebels: 18 year-old Rodel, and 17 year-old Marben and Myjon.

No military personnel was present in the dialogue to give the former combatants the freedom to express what they want and the CHR team to ask their questions freely.

The CHR is an independent constitutional office whose function is to investigate all forms of human rights violations in the country.
“They asked how we were recruited at a young age, I said to them (CHR) that the NPA promised to send me to school so I joined because my parents can’t afford my education,” Myjon said after his interview. He surrendered to the 8IB due to fatigue and fear for security.

Lieutenant Colonel Ronald Illana, the commanding officer of the 8th Infantry Battalion, reiterated the transparency battalion to any organization that wants to visit the ex-NPA child combatants.

“Our unit is open to all organizations who wish to check and investigate incidents of abuses to our people, we are transparent on this matter,” he said. He also condemned the recruitment of minors by the NPAs. “These children are proof that they (NPA) are recruiting minors and this should be stopped.

Children should go to school, not to war,” he further said. The 8IB has assisted former minor child combatants in filing legal cases against their recruiters for Violation of Republic Act (RA) 11188 also known as Special Protection for Children in Situations of Armed Act and RA 9851 or the Act Defining and Penalizing Crimes Against International Humanitarian Law (8IB/PA)