ELCAC is all about delivery of basic services and good 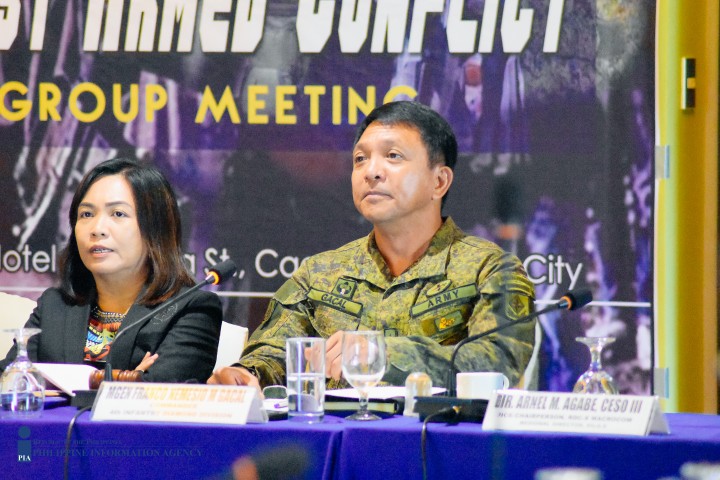 In a meeting with the members of the Regional Task Force to End Local Communist Armed Conflict (RTF-ELCAC)-10 Technical Working Group (TWG) here yesterday, March 10, Gacal cited the gains and progress in synchronizing the programs, projects and activities (PPAs) and ensuring budget allocations through the help of the National Economic and Development Authority (NEDA)-10 led by Regional Director Mylah Faye Aurora B. Carniño.

The goal is to address gaps and challenges, Gacal said, adding “by the end of the term of the President, all 763 barangays of Northern Mindanao must be conflict resilient.”

“Peace, Law Enforcement, and Development Support (PLEDS) group under the task force is very fast in clearing barangays,” he pointed out.

Lagonglong Municipal Administrator Ponciano Bana said out of 78 families in Sitio Kamansi, only 36 families are willing return there. This sitio was known to be New People’s Army (NPA) rebel infested an area where it built its headquarters for so long a time.

“Nakita ninyo nga maayo gyud pagkalubag ang utok sa atong mga igsuon didto sa Kamansi nga dli mupauli hangtud naa’y naka-uniporme (You see how these people had been brainwashed by the left to the the point that they won’t go home so long as they see uniformed personnel there),” he stressed.

Gacal admitted that Sitio Kamansi in Lagonglong town and Sitio Lantad in Balingasag municipality had been “areas of concern” by the army.

He said, “Remove Lagonglong and Balingasag in the area operation of the NPA and we solve 80 percent of the [insurgency] problem in Region 10.”

“Those have been their headquarters for so long. They need those because Cagayan de Oro is the center of Region 10. If you are the commander, you control the key terrain, which is Cagayan de Oro City. Remove that area, and we will win,” Gacal continued.

How people perceive the government

NEDA-10 Regional Director Mylah Faye Aurora B. Cariño said, “There are knowledge gaps in pursuit of development and we address these challenge gaps by research agenda.”

“We realize there are some knowledge gaps that we need to address so that we can appropriately develop strategies we need to pursue to attain the goals of peace and development,” she explained.

One of the priority researches that has been approved by the Regional Development Council (RDC) is a study on academic achievement of Northern Mindanao.

Very simply, Cariño added, “there must be something not appropriate in how we teach our kids and right now, this is really alarming for us.”

Kids in Region 10 are only learning 35-40 percent on what they should learn when they reach grade 6, finish junior or senior high school.

“We know our kids our prone to radicalization. That is why we have this study,” Cariño explained.

Also, a client satisfaction survey of the Philippine Army’s 1st and 4th Infantry Divisions is underway to determine how effective are the 1st ID and the 4th ID in providing security services to their areas of responsibility.