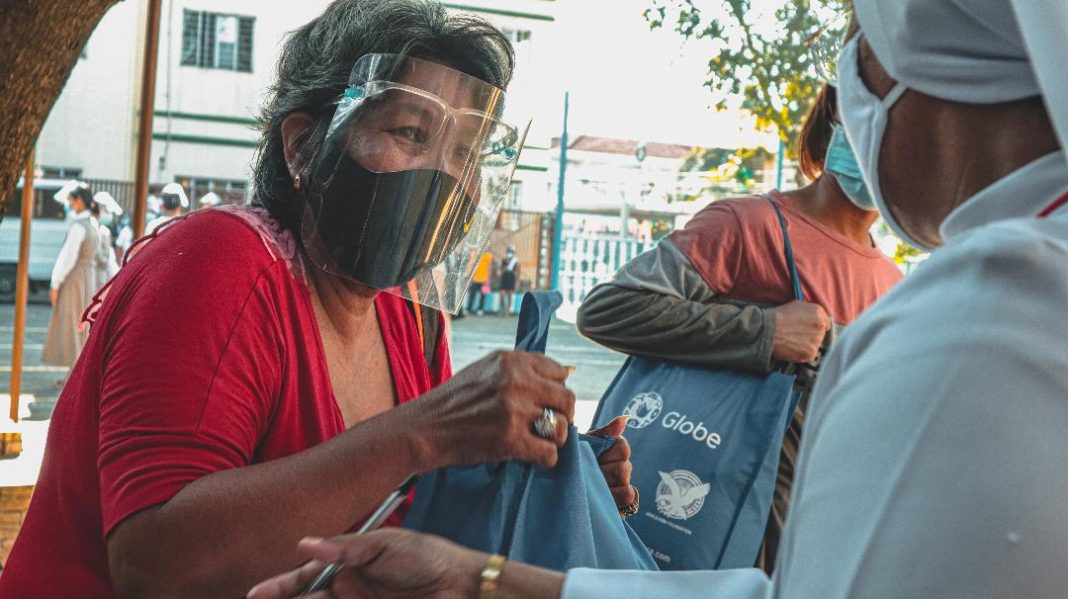 Globe and Walang Iwanan Alliance (WIA) gave at least 14,000 food and rice packs to disadvantaged and underserved communities in Mandaluyong, Paranaque, San Juan and other cities and municipalities in Luzon recently.

Through the support of Globe customers, the company and WIA were able to raise more than P4.9 million, with more than P650,000 coming from customers’ donations through Globe Rewards and GCash apps, which in turn was used to provide and deliver the food assistance.

“With the continued and unwavering support of our customers and the Walang Iwanan Alliance, we are able to help address the most pressing needs of the underserved communities, such as hunger.   We are glad to enable our partners and customers to raise funds in a safer way through our digital platforms,” said Joey Kilayko, Head of Globe Rewards.

“We are happy to partner with Globe which shares our advocacy to support families in need of immediate assistance during this pandemic. Involuntary hunger is a pressing issue and we can’t do it alone. By enabling us with a resource stream via Globe Rewards and GCash donation facility, Globe helps us sustain these efforts and at the same time empower the public to contribute to efforts in addressing hunger,” said Jose Maria Montelibano, Spokesperson, Walang Iwanan Alliance.

With the enhanced community quarantine imposed at the end of Q1 in 2020, disadvantaged families were placed in a more vulnerable position as limited mobility has diminished their livelihood options. A study from Social Weather Stations (SWS) released in September 2020 showed that 7.6 million Filipino households experienced involuntary hunger amidst community quarantines due to poverty – almost a million families coming from Metro Manila alone. Government subsidies, while available, were not enough to serve all affected families.

Spearheaded by the ADMU616569 Foundation, Inc., the Walang Iwanan Alliance is a citizen-led initiative to build a platform that unites all efforts to mitigate hunger in the most vulnerable communities across Metro Manila during the pandemic. Its goal is to set up a vast network of food distribution systems, starting with the establishment of Food Banks (physical and virtual) in key locations to create new and support existing efforts on the ground.

Globe, on the other hand, empowers every Filipino to support underserved families within Metro Manila by providing advocacy platforms such as Globe Rewards and GCash.  At the end of 2020, the initiative has resulted in the provision of food supply to over 6,000 families in Paranaque and Mandaluyong. Beyond this, almost 10,000 families affected by the recent typhoons were provided with relief in the form of rice subsidies. All in all, the partnership has reached 14,600 families in Luzon.

Globe also enabled customers and various institutions to do a Globe of Good by providing tech solutions.  Digital fundraising platforms such as Globe Rewards and GCash coupled with communications campaigns were able to raise the following:

*Php 1.5M for Rewards campaign for Rolly and Ulysses

Globe urges its customers to donate their Globe Rewards Points to Walang Iwanan Alliance. Each point donated is equivalent to Php 1. The collected amount will be used to purchase food packs for low-income families. The WIA will take care of identifying the most vulnerable communities within Metro Manila while working with the respective barangays, LGUS, and the members of the Alliance which are the organization’s existing ground support.