How a quarantine lock down virtually opened church doors 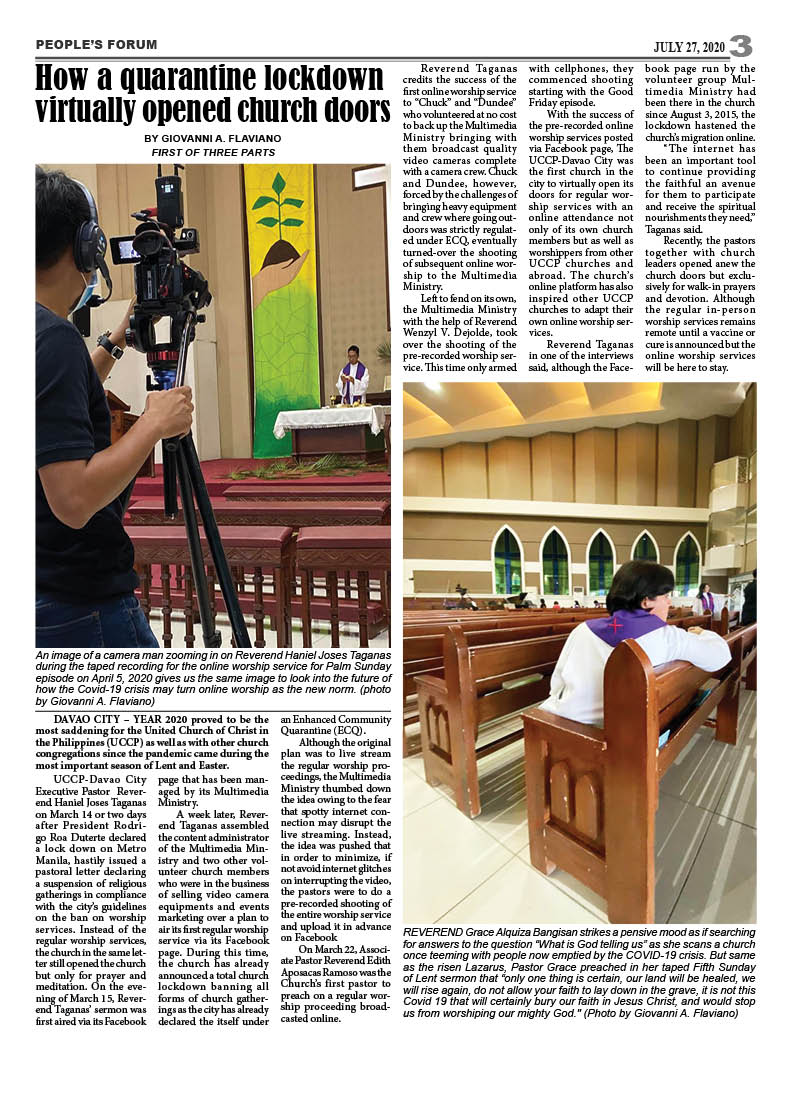 BY GIOVANNI A. FLAVIANO

DAVAO CITY – YEAR 2020 proved to be the most saddening for the United Church of Christ in the Philippines (UCCP) as well as with other church congregations since the pandemic came during the most important season of Lent and Easter.

UCCP-Davao City Executive Pastor Reverend Haniel Joses Taganas on March 14 or two days after President Rodrigo Roa Duterte declared a lock down on Metro Manila, hastily issued a pastoral letter declaring a suspension of religious gatherings in compliance with the city’s guidelines on the ban on worship services. Instead of the regular worship services, the church in the same letter still opened the church but only for prayer and meditation. On the evening of March 15, Reverend Taganas’ sermon was first aired via its Facebook page that has been managed by its Multimedia Ministry.

A week later, Reverend Taganas assembled the content administrator of the Multimedia Ministry and two other volunteer church members who were in the business of selling video camera equipments and events marketing over a plan to air its first regular worship service via its Facebook page. During this time, the church has already announced a total church lockdown banning all forms of church gatherings as the city has already declared itself under an Enhanced Community Quarantine (ECQ).

Although the original plan was to live stream the regular worship proceedings, the Multimedia Ministry thumbed down the idea owing to the fear that spotty internet connection may disrupt the live streaming. Instead, the idea was pushed that in order to minimize, if not avoid internet glitches on interrupting the video, the pastors were to do a pre-recorded shooting of the entire worship service and upload it in advance on Facebook.

On March 22, Associate Pastor Reverend Edith Aposacas Ramoso was the Church’s first pastor to preach on a regular worship broadcasted online. Reverend Taganas credits the success of the first online worship service to “Chuck” and “Dundee” who volunteered at no cost to back up the Multimedia Ministry bringing with them broadcast quality video cameras complete with a camera crew. Chuck and Dundee, however, forced by the challenges of bringing heavy equipment and crew specially where going outdoors was strictly regulated under ECQ, eventually turned-over the shooting of subsequent online worship to the Multimedia Ministry.

Left to fend on its own, the Multimedia Ministry with the help of Reverend Wenzyl V. Dejolde, took over the shooting of the pre-recorded worship service. This time only armed with cellphones, they commenced shooting starting with the Good Friday episode.

Reverend Taganas in one of the interviews said, although the Facebook page run by the volunteer group Multimedia Ministry had been there in the church since August 3, 2015, the lock down hastened the church’s migration online.

“The internet has been an important tool to continue providing the faithful an avenue for them to participate and receive the spiritual nourishments they need,” Taganas said.

Recently, the pastors together with church leaders opened anew the church doors but exclusively for walk-in prayers and devotion. Although the regular in-person worship services remains remote until a vaccine or cure is announced but the online worship services will be here to stay.