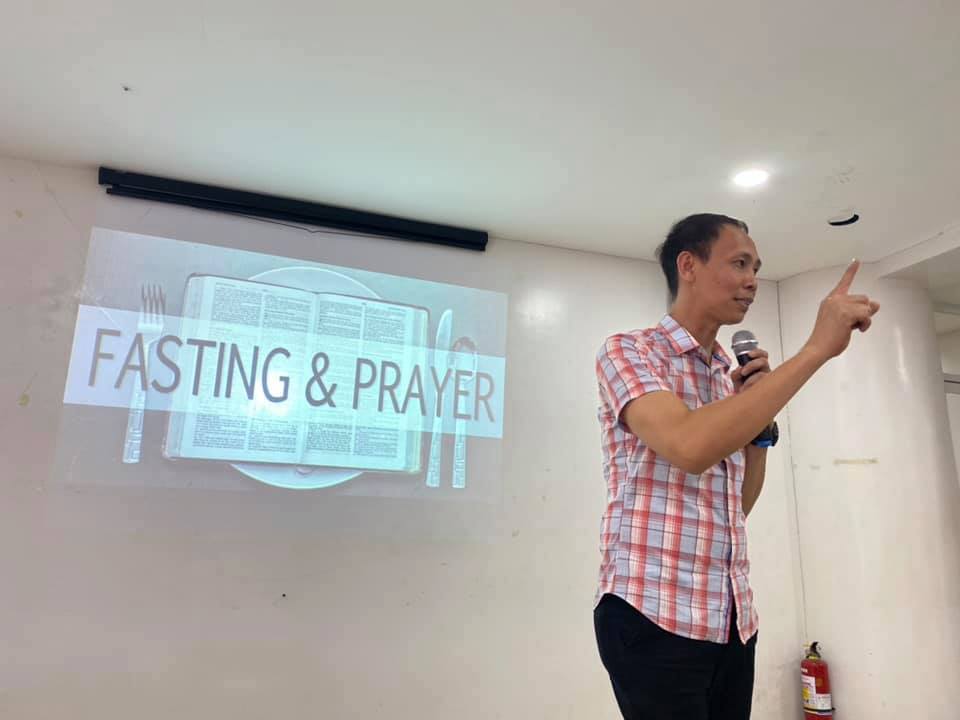 DAVAO CITY – “Prayer is a relationship. A simple talking with God. And when you have this relationship, God is going to answer you. This is the best thing.”

These were the description of Reverend Nani Deita, executive pastor of General Santos City UCCP Central City Church during his lecture at the UCCP-Davao City Congregational Church at the CROSSroads entitled “Fasting and Prayer.” UCCP-Gensan has about 700 members.

He went on to check on our relationship with God saying, “How is our prayer life?” “Are we still having our daily devotions? Our connection with the Lord?”

“Prayer is a relationship. A simple talking with God. And when you have this relationship, God is going to answer you. This is the best thing.”

“We must have this living faith with the Lord,” he reminded.

Speaking before church members numbering about 40 participants on Saturday (February 29, 2020) at the Church Council Room, Pastor Deita was invited by Director for Equipping and Discipleship Reverend Wenzyl Dejolde to talk about how fasting can be integrated as a form of prayer.

His thick Ilonggo-accent betrays his Cebuano-delivered lecture that later reveals his birth place in Norallah, South Cotabato province. The 42-year-old pastor gave a confession at the earlier part of his lecture saying it was not until he was 21 years old that he accepted Jesus Christ as his personal savior. He confessed that during his college days, he was an “atheist.” Being a campus leader he thought he was “bright” for God.

Until he caught the eye of God.

Having found later his place in church – at the back pews – he remembers praying for a prospective wife even as he panicked that he was not getting any younger. Then at the age of 32 while seated at the pews, he saw at the corner of his eyes a woman’s blurred image whisked by his pew that instantly whiffed romance in the air. The woman was Flora May Quirino who would later exchange “I dos” with him.

Perhaps God unconvinced, tried to test him this time.

The couple craving for a family, feverishly prayed for a child.  Four months later during a trip to Island Garden City of Samal that his wife fainted. His worries later turned to rejoicing when the doctor announced that she was pregnant. Same as with the Biblical Sarah, God made true of his promise. They named their first born daughter Promise now 8 years old and then her sister Adrielle, 5 years old.

God still wanted to give him another try.

Instead of accepting consultancy offers as a Veterinarian that can promise the comforts that a new family man can wish for, he instead embraced the pastoral call which later turned out to be a struggle for him. “Hindi ka yayaman diyan” was his parents’ firm objection. Still he soldiered on for God until he had his Gethsemane moment when he uncontrollably cried before his siblings for understanding and acceptance of his path as a Man of the Cloth.

But God wasn’t done yet.

Several times his being a pastor would put him in ‘pins and needles.’ Recalling when he was invited at a UCCP event, the members would ask: “Pastor unsa ka nga theology school gikan?” “Sa tinood lang wala koy i-tubag,” he admits.

“I was also invited here in Davao, and there was a gathering of church leaders in Brokenshire” to lecture about the “Python Spirit” or about “Deliverance from the Evil.” After his talk, a group of Elder Women approached and asked him: “Graduate ka ba ng Silliman (Divinity School) University or SCC or Southern Christian College?”

“There was one time that my personality was questioned when I was invited to Tagaytay City for a gathering of the Christian Youth Association Fellowship (CYAF).”

When asked by a pastor where he graduated his Theology and answered at Peniel Bible Institute UCCP in General Santos City, he was stunned by the pastor’s reply: “Ah, so you mean your school is not accredited by the UCCP?”

But for Pastor Nani, everything is behind him now including what he calls “persecution.” And as he describes it, after “intensive kneeling with the Lord, God brought everything in its perfect time, perfect place.” Reverend Nani Deita his lecture series soon on UCCP-Davao City Facebook page. (article and photos by the UCCP-Davao City Multimedia Ministry)