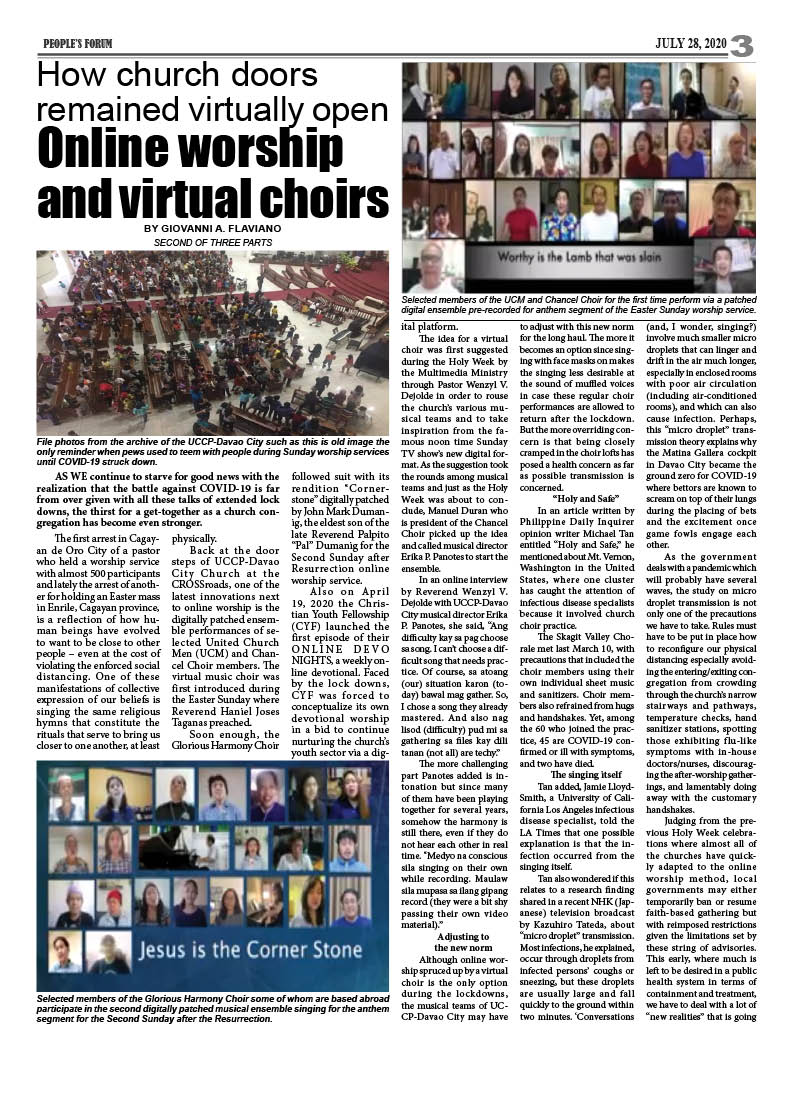 By Giovanni A. Flaviano

DAVAO CITY — AS WE continue to starve for good news with the realization that the battle against COVID-19 is far from over given with all these talks of extended lockdowns, the thirst for a get-together as a church congregation has become even stronger.

The first arrest in Cagayan de Oro City of a pastor who held a worship service with almost 500 participants and lately the arrest of another for holding an Easter mass in Enrile, Cagayan province, is a reflection of how human beings have evolved to want to be close to other people – even at the cost of violating the enforced social distancing. One of these manifestations of collective expression of our beliefs is singing the same religious hymns that constitute the rituals that serve to bring us closer to one another, at least physically.

Back at the door steps of UCCP-Davao City Church at the CROSSroads, one of the latest innovations next to online worship is the digitally patched ensemble performances of selected United Church Men (UCM) and Chancel Choir members. The virtual music choir was first introduced during the Easter Sunday where Reverend Haniel Joses Taganas preached.

Also on April 19, 2020 the Christian Youth Fellowship (CYF) launched the first episode of their ONLINE DEVO NIGHTS, a weekly online devotional. Faced by the lockdowns, CYF was forced to conceptualize its own devotional worship in a bid to continue nurturing the church’s youth sector via a digital platform.

The idea for a virtual choir was first suggested during the Holy Week by the Multimedia Ministry through Pastor Wenzyl V. Dejolde in a bid to rouse the church’s various musical teams inspired from the famous noon time Sunday TV show’s new digital format. As the suggestion took the rounds among musical teams and just as the Holy Week was about to conclude, Manuel Duran who is president of the Chancel Choir picked up the idea and called choir director Erika P. Panotes to start the ensemble.

The more challenging part Panotes added is intonation but since many of them have been playing together for several years, somehow the harmony is still there, even if they do not hear each other in real time. “Medyo na conscious sila singing on their own while recording. Maulaw sila mupasa sa ilang gipang record (they were a bit shy passing their own video material).”

Adjusting to the new norm

Although online worship spruced up by a virtual choir is the only option during the lockdowns, the musical teams of UCCP-Davao City may have to adjust with this new norm for the long haul. The more it becomes an option since singing with face masks on makes the singing less desirable at the sound of muffled voices in case these regular choir performances are allowed to return after the lockdown. But the more overriding concern is that being closely cramped in the choir lofts has posed a health concern as far as possible transmission is concerned.

In an article written by Philippine Daily Inquirer opinion writer Michael Tan entitled “Holy and Safe,” he mentioned about Mt. Vernon, Washington in the United States, where one cluster has caught the attention of infectious disease specialists because it involved church choir practice.

The Skagit Valley Chorale met last March 10, with precautions that included the choir members using their own individual sheet music and sanitizers. Choir members also refrained from hugs and handshakes. Yet, among the 60 who joined the practice, 45 are COVID-19 confirmed or ill with symptoms, and two have died.

Tan added, Jamie Lloyd-Smith, a University of California Los Angeles infectious disease specialist, told the LA Times that one possible explanation is that the infection occurred from the singing itself.

Tan also wondered if this relates to a research finding shared in a recent NHK (Japanese) television broadcast by Kazuhiro Tateda, about “micro droplet” transmission. Most infections, he explained, occur through droplets from infected persons’ coughs or sneezing, but these droplets are usually large and fall quickly to the ground within two minutes.

‘Conversations (and, I wonder, singing?) involve much smaller micro droplets that can linger and drift in the air much longer, especially in enclosed rooms with poor air circulation (including air-conditioned rooms), and which can also cause infection. Perhaps, this “micro droplet” transmission theory explains why the Matina Gallera cockpit in Davao City became the ground zero for COVID-19 where bettors are known to scream on top of their lungs during the placing of bets and the excitement once game fowls engage each other.

As the government deals with a pandemic which will probably have several waves, the study on micro droplet transmission is not only one of the precautions we have to take. Rules must have to be put in place how to reconfigure our physical distancing especially avoiding the entering/exiting congregation from crowding through the church’s narrow stairways and pathways, temperature checks, hand sanitizer stations, spotting those exhibiting flu-like symptoms with in-house doctors/nurses, discouraging the after-worship gatherings, and lamentably doing away with the customary handshakes.

Judging from the previous Holy Week celebrations where almost all of the churches have quickly adapted to the online worship method, local governments may either temporarily ban or resume faith-based gathering but with reimposed restrictions given the limitations set by these string of advisories.  This early, where much is left to be desired in a public health system in terms of containment and treatment, we have to deal with a lot of “new realities” that is going to go on a lot longer.