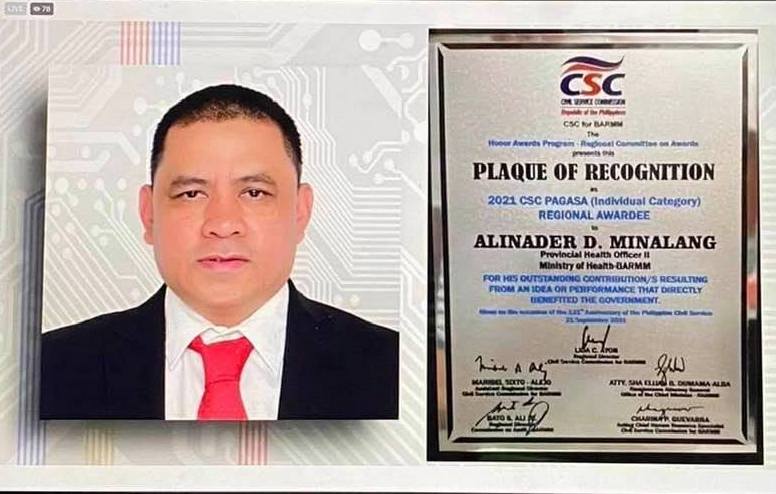 MARAWI CITY (PIA)–The chief of the Lanao del Sur Integrated Provincial Health Office (IPHO) emerged as one of the regional winners of the Pagasa Award of the Civil Service Commission in the Bangsamoro Autonomous Region in Muslim Mindanao (CSC-BARMM).

The award was conferred to Dr. Alinader Minalang in a virtual ceremony held Thursday, September 30.

Other Pagasa awardees were Mayor Tiblan C. Ahaja from the Municipal Government of Sitangkai in Tawi-Tawi and Lanie A. Castañares, Municipal Civil Registrar from Datu Abdullah Sangki in Maguindanao.

The Pagasa award is part of the Honor Awards Program given by the CSC every year to recognize government officials and employees who have displayed outstanding work performance and have excelled or shown utmost dedication and commitment to public service.

Aside from the Pagasa award, CSC-BARMM also bestowed the Dangal ng Bayan award to Sadat B. Minandang, Master Teacher 1 from Cotabato City.

“These winners from the BARMM region are automatically nominated to the national level search and we are convinced that their performance and achievements are at par with the rest of their fellow nominees from the other regions of the country,” said CSC-BARMM Regional Director Lida C. Ayon during the awarding rites.

The recognition of outstanding public servants was among the highlights of the regional celebration for the 121st Philippine Civil Service anniversary anchored on the theme “Transforming Public Service in the Next Decade, Honing Agile and Future-ready Servant Heroes.” (APB/PIA Lanao del Sur with reports from Bangsamoro Information Office)