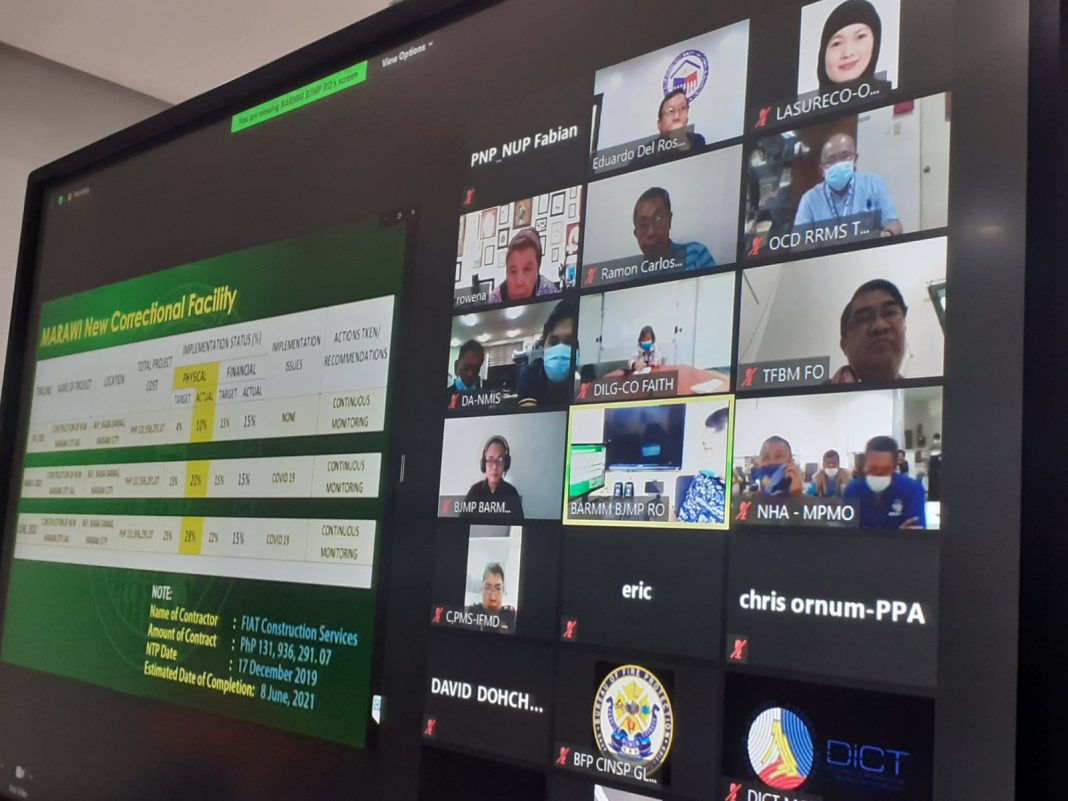 QUEZON CITY — The Marawi City rehabilitation is on target.

This was the report of most implementing agencies involved in the massive rehabilitation of the war-torn Marawi City to Task Force Bangon Marawi (TFBM) Chairman Secretary Eduardo Del Rosario during Wednesday afternoon’s video conference.

The participants, mostly national and regional directors from various government agencies, committed to complete their respective projects within the December 2021 deadline set by TFBM for all infrastructure projects inside the most affected area (MAA).

Secretary Del Rosario, however, pushed the implementing agencies to target earlier completion date. “Work double time with your respective projects, coordinate among yourselves to ensure that all projects are synchronized, and will go full blast by next month,” the TFBM chairman stressed. “If you have to work 12 hours a day, do it,” he added.

Marawi City Mayor Majul Gandamra, who participated in the video conference, said that all projects being undertaken by the local government unit (LGU) are well within the December 2021 target date.

“Groundworks have already started inside MAA,” Gandamra reported, adding “even before the approval of the Special Allotment Release Order (SARO).” The mayor was referring to the P3.56 billion budget approved for release by President Rodrigo Duterte in April and May for the rehabilitation works in Marawi City. “By July, we will have full-scale construction,” Gandamra vowed.

He said all LGU projects, including the Grand Padian Central Market, Command Center, 24 barangay centers with health facilities and madaris and the Marawi Museum, will be completed by the end of 2021.

The National Housing Authority (NHA) reported that groundworks for road networks within MAA have also started and will be completed by July 2021. On the other hand, the Lanao del Sur Electric Cooperative (Lasureco) said that erecting electric posts in the priority sectors inside MAA is almost completed and it’s just awaiting approval of the budget for the acquisition of a substation to address the increasing power supply requirement of Marawi.

The current capacity of Lasureco could no longer sustain the increasing power requirement of Marawi City, where Mayor Gandamra has previously noted increased economic activities that boosted tax collection.

“It’s a sign of progress and a challenge to Lasureco,” admitted Omikalsom Maruhon of Lasureco. The Department of Transportation (DoTr) vowed to finish the Marawi City multi-level parking and transport hub within eight months after securing notice to proceed.

Both the Departments of Health (DOH) and the Public Works and Highways (DPWH) also committed to complete their respective projects within the self-imposed timeline.

“These prove government critics wrong. Let me reiterate that their claims of inaction and neglect are very inaccurate and unfair,” Secretary Del Rosario said. “The government’s commitment is not only to rehabilitate Marawi City but to establish a peaceful and economically progressive city.

It is not only constructing physical infrastructures but equally important are the numerous social, economic, health, educational, and peacebuilding interventions that TFBM agencies had implemented and will continue to pursue,” he concluded. (DHSUD)