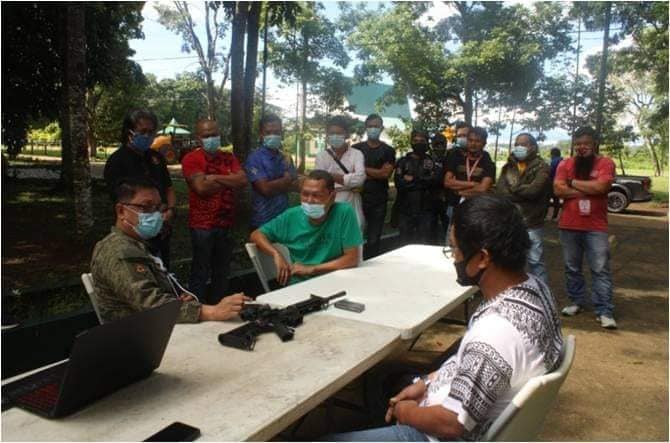 Alias Afghan who was a sub-leader of the DI-Maute Group led by late Abdullah Maute, voluntarily surrendered to Col. Jose Maria R Cuerpo II, commander of the 103rd Infantry Bde of the Philippine Army bringing along with him one (1) Colt Automatic Rifle 15 Caliber 5.56mm M16A1 rifle with one (1) magazine and 20 rounds live ammunitions.

Afghan was involved in numerous terroristic activities in Lanao del Sur that include encounters against military troops at Barangay Sandab, Butig in 2015 and Barangay Ragayan, Poona Bayabao in 2017 where he suffered a gunshot wound in his lower right abdomen while three (3) of his members died during the encounter.

He was also involved in the planning of the devastating Marawi siege that claimed thousands of lives and millions worth of properties.
“I realized that the best option for me is to return to the folds of the law and sought the help of the Local Government Unit of Lumbatan led by Mayor Allan Lao,” Afghan said.

Meanwhile, Col. Cuerpo is grateful that Afghan chose to return to the folds of the law to help in the peace and development of the area.
“I am hoping that this surrender would encourage other terrorist members to follow. The government is always ready to help former rebels to return to their normal lives,” he said.

The military and local government units in  Lanao del Sur will continue to work hand in hand to facilitate the surrender of local terrorist groups to achieve genuine peace in the province. (Haribon Brigade/PIA ICIC)