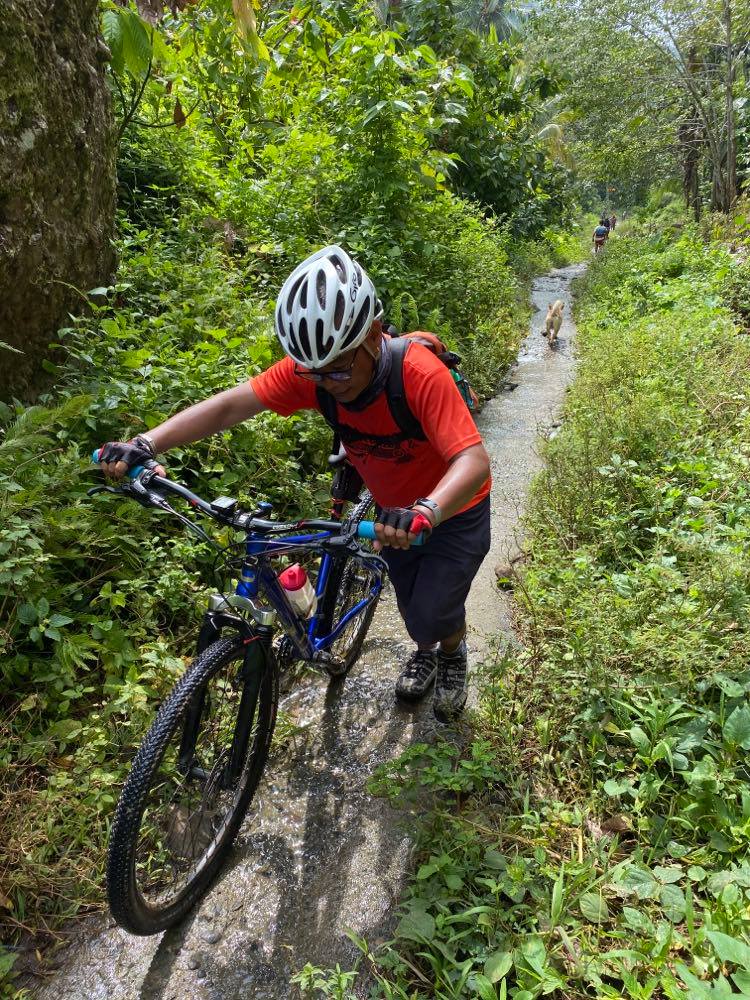 STA. CRUZ, Davao del Sur – “Difficult roads lead to beautiful destinations” as the saying goes and nothing can be as difficult as riding on a 10-kilometer lung-busting and nauseating rocky climbs, slippery and treacherous down hills, coupled with heavy rain and later be rewarded with a breathtaking view of the majestic Pilan River and Bagon Falls of Barangay Sinoron, this town.

Municipal Tourism Officer, mountaineer, blogger and bird-watching aficionado Julius Paner earlier informed us that a visitors’ pass is needed before granted access to the river which you have to get from their tourism office days in advance.  A local guide is another requirement and waiting for us at the barangay hall was the smiling Wilmar Obedencio, a lumad of said barangay.

The ride started from Poblacion, Sta. Cruz where we parked our vehicles at the church compound of the United Church of Christ in the Philippines (UCCP). The Reverend Ely Ocariza gave us a send-off prayer and started with a short ride (Digos City-bound) along the national highway. Upon reaching the public cemetery, we turned right at the entrance of Barangay Sinoron where the riders first took a group photo with the tarp signage informing about the route to the river.

We learned from Tourism Planning Officer Aidelita Aguilar that the barangay once banned trekking to the falls not only because of the pandemic but also of undisciplined trekkers – some of whom arrive by truckloads and leave garbage.

But the municipality urged the opening of the river and its falls to visitors in order to help locals earn from tourists. As a matter of fact, various government agencies are organizing and training locals for possible business opportunities generated by tourism, Aguilar said.

She said Sinoron river and its majestic falls is the only ecotourism site it can claim as its own unlike other trekking destinations along Mount Apo which straddles along the borders of Davao del Sur-North Cotabato municipalities and the city of Davao.

Julius Paner said the council has yet to pass an ordinance setting rules for tourists and guide fees.

Our guide Wilmar told us that they are protecting the river not only from litter bugs, vandals but even from illegal logging. They allow cutting of trees but only for residents who use it for house construction. They even ban a lease on their lands for banana plantations.

We also learned that Sinoron has a much spectacular falls but requires about a day’s hike.

The climb to the river is hellish but the the downhill back to the barangay hall may not necessarily be a heavenly reward. Descending on slippery rocks caused some of us to crash on the trail.

Overall, the Sinuron ride was an “epic,” and our ka-TEAM RAD Edwin Salinas commented, “undoubtedly one of the most challenging rides we have encountered as a team. And we love it.” Indeed it was epic and an epic adventure comes from those who dare to go farther.