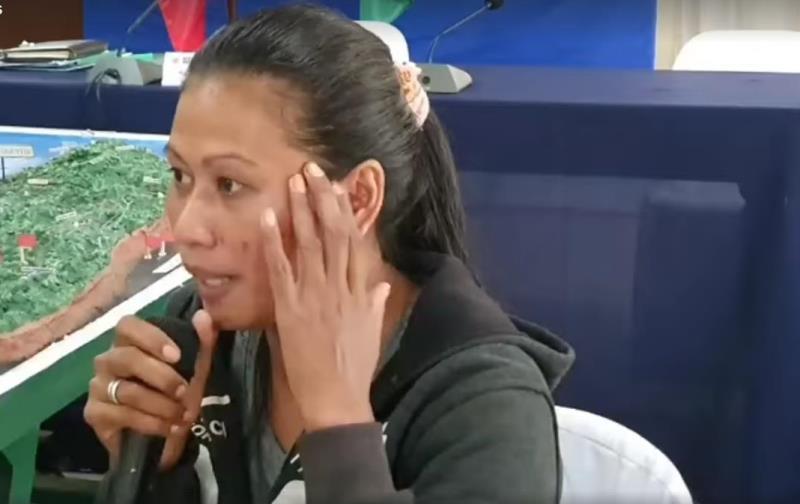 Thirty-year-old Elizabeth Dela Torre was dazed with grief when she spoke to reporters on Thursday morning.

“To those who killed my husband, be vigilant because I swore to avenge his death by capturing the killer. I will fight back and make sure that you will not go unpunished. All I want is justice. My family and friends promised me their support in this battle. I call for our human rights groups to conduct a thorough investigation. I just pray the people who did this rot in jail and in hell,” she said.

In an interview, Elizabeth said her 33-year-old husband Pedro Omblero was off from work on October 27 and was at home in barangay Vintar, Valencia City at around 8:30 in the evening when seven armed men barged in and introduced themselves as NPA. Five of them went in, while the other two stayed outside as lookouts.

Elizabeth said the masked armed men hog-tied and dragged her husband onto a motorcycle and carried them off to a remote area in nearby Purok 18, Batangan, Valencia City.

Upon reaching an isolated vacant lot, all had stopped and dismounted. The assailants walked their motorcycles a few steps away so as not to attract attention from anybody in the neighborhood, she said.

“There and then, I cried and begged to spare Pedro’s life but one of the gunmen shot him, hitting the left eyebrow. I screamed for help. I thought it was my turn but they moved closer to Omblero and warned him that anybody who committed his whole life to the government’s armed group should be punished because it’s a massive offense. Then I heard another gunshot—the second time. I saw the hitman fired his gun, hitting again the abdomen,” Elizabeth recounted in dialect as she began crying.

She added that through eight years in serving the barangay as a CAFGU, she does not know of her husband having a conflict with anybody nor with the NPA. Along with friends, neighbors, and barangay leaders, they vouched for Pedro’s good conduct. That’s why she was shocked by the scene.

“Why, how could they shoot him when we are unarmed and helpless? I could not imagine my husband would fall victim in the cruel hands of the CPP-NPA because Pedro is a loyal and dedicated CAFGU assigned in Lumbayao Patrol Base of the 88th Infantry Battalion,” she said.

In her “Public Appeal (Panawagan)” aired over radio stations, Elizabeth was tough on her will to exhaust all means in getting help so that justice would be served.

“I am earnestly requesting the CHR (Commission on Human Rights) to help me in this fight. I trust CHR because I’ve heard they have been very active in helping the poor who have been abused by whoever. I also urged Karapatan, who works for the protection of human rights, to lead an impartial investigation. Finally, I call on the family members of NPA abuse victims to file cases against them (NPA) so they will be captured and punished for their crimes,” she said.

“CAFGU Omblero was unarmed, off-duty, and has begged for his life. The NPA should have respected his rights enshrined by the IHL (International Humanitarian Law) as he can no longer be considered combatant because he was already captured, disarmed, and therefore has no capacity to fight back,” De Leon said.

He clarified that Omblero was considered a “captive” when he was abducted.

The Law [IHL] says that a “captive” is not a combatant, thus has the right to life and must be treated humanely.

More so, the captive was executed in front of his wife. Then, the more that the perpetrators are liable for IHL violation punishable under R.A 9851 because the wife has no direct participation in the conflict and the law provides for the protection of the vulnerable — women, children, the aged, indigenous peoples, persons with disabilities, the civilians, and non-combatants, De Leon added.

He said they will recommend to the city government of Valencia to create a Fact-finding Committee on IHL for an in-depth investigation.

“I also urged KARAPATAN, the self-declared watchdog of IHL, to investigate this case and release its findings to the public,” De Leon said. (RLRB, PIA Bukidnon)