By Giovanni A. Flaviano

NAPC Secretary Noel K. Felongco in a press conference via Zoom on Wednesday was elated of the agency’s recent accomplishment under their agenda of institutionalizing basic sector participation in terms of governance. This announcement came following the recent signing of a Memorandum of Agreement (MOA) with 19 local government units of Mindanao.

He also announced that additional local government units from the classified “poorest provinces” based on the 2018 Poverty Incidence conducted by the Philippine Statistics Authority will soon be signing another set of MOA this July 30.

Under the MOA, the LGUs will undertake the implementation of NAPC’s Sambayanihan Serbisyong Sambayanan (3S) program that sought to address poverty in 40 priority provinces.

The LGUs are obligated to help tap volunteers to ensure that government services are uplifting the lives of the oppressed and the marginalized.

Felongco emphasized the LGU’s role saying “I believe that our strong fight for poverty is tethered not only on the design of our programs and projects but also most important in the unity among us and of all our stakeholders. Our main challenge as an agency bridging the various sectors in the government lies in translating these recommendations into more equitable programs.”

“Wala po tayong pondo galing sa NAPC since it is only a coordinative and advisory body of the national and local government in implementing social reform agenda and poverty alleviation. Hindi po kami ang implementing agency. Wala po kaming implementing powers. Our mandate is only on monitoring and policy making advocacy.” 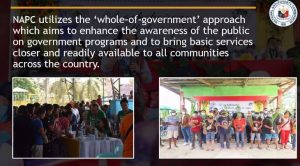 “The NAPC is also credited for strengthening the participation of the “14 basic sectors” under a Provincial Consultative Assembly (PCA) and a National Sectoral Assembly (NSA). Under said assemblies, these 14 basic sectors can elect their sectoral representatives and conducting initiatives to ensure that the issues and concerns of the basic sectors, priority and sectoral, and cross sectoral agenda be addressed through meaningful feedback and comments. 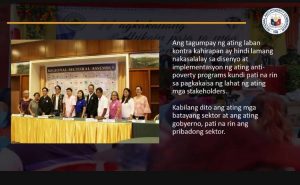 Felongco during the press conference, credited President Rodrigo Roa Duterte’s administration for providing free legal education, implementation of the Universal Health Care Act, establishment of Malasakit Centers, free irrigation for farmers, land distribution, granting additional privileges for senior citizens, and the signing of the Magna Carta for the Poor or RA11291 where the NAPC is tasked in writing its implementing rules and regulations.