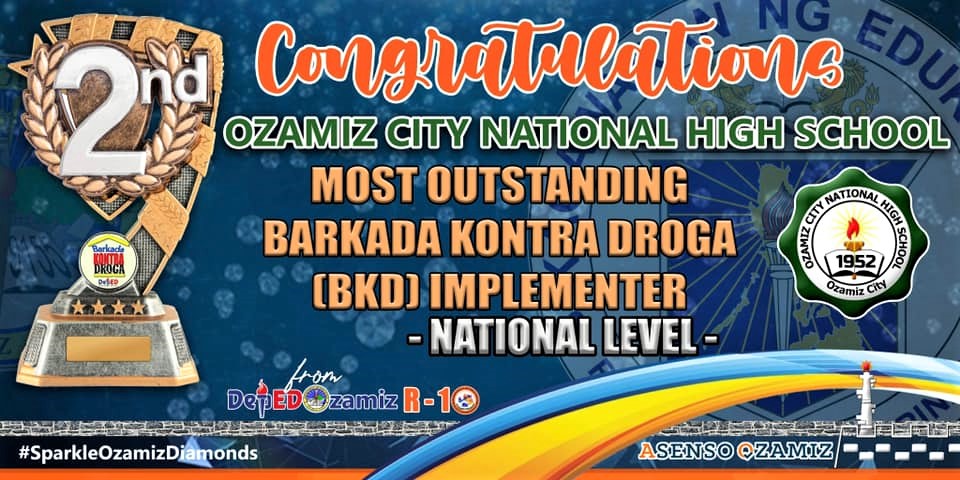 Ozamiz City Schools Division Superintendent Jean G. Veloso said more than the ranking obtained by OCNHS in the search is the impact of BKD on the lives of their students, a victory not only for the school, but for the city and Region 10 as a whole, which inspired DepEd Ozamiz.

The support of LGU-Ozamiz under the leadership of Mayor Sancho Fernando Oaminal, Deputy Speaker Henry Oaminal, all stakeholders, parents, and the community inspired them to further strengthen the BKD campaign.

Secondary School Principal II Lilibeth Abamongga also cited the impact of the program to the children, especially the support groups such as the Art Against Drugs, Media Against Drugs, Livelihood Against Drugs, and Sports against Drugs. “These helped the youth to avoid evil influences and drugs,” she added.

Veloso and Abamongga are very grateful for the victory of OCNHS in BKD, and also for the support of LGU-Ozamiz and all stakeholders who made the victory possible not only for OCNHS but especially for the city of Ozamiz.

Barkada Kontra Droga is designed as a preventive education and information program to counter the dangers and disastrous effects of drug abuse. It aims to empower the youth to be the catalyst within his peer groups in advocating drug-free lifestyles. (SMRN/ PIA Misamis Occidental)