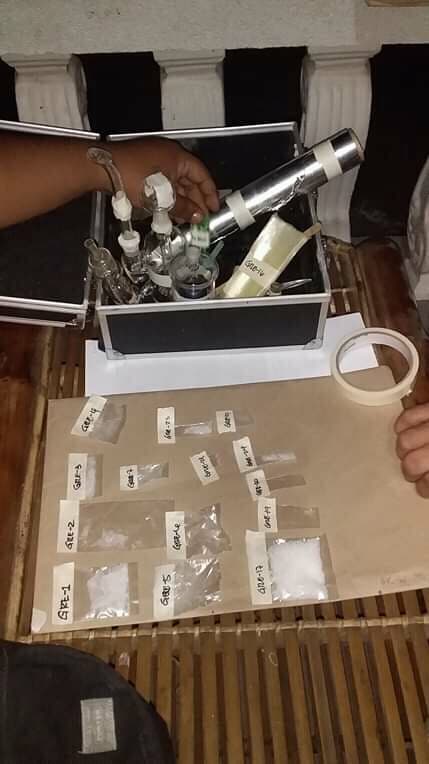 High-Value target Benjamin FLores Petines Jr., 45 years old, a resident of Lantana Subdivision, Barangay Cannery Site, Polomolok, South Cotabato was arrested by the operatives of RPEU on a Drug Bust operation at 8:00AM of November 22, 2019. Petines were under surveillance of the RPDEU for a long period of time Pertines were also known to have a lot of connection on Illegal drug activities inside and outside the region. Confiscated from his possession were Six(6) pieces heat-sealed transparent plastic sachets containing white crystalline substance believed to be traces of shabu, Eight(8) pieces of heat-sealed transparent plastic sachets containing white crystalline substance believed to be shabu with an estimated total weight of more or less five (5) grams and estimated DDB value amounting to Php 60,000.00,Three(3) pieces glass pipe, One(1) improvised bamboo sealer, One(1) roll aluminum foil, One(1) pack plastic cellophane, Two(2) pieces lighter and One(1) piece scissor, One(1) unit Honda Click 150 motorcycle and One(1) unit Honda XR 400 motorcycle.

Meanwhile, in other 28 drug net operations executed by Police Drug Enforcement Unit in Province and Cities for the entire week,  31 street-level drug personalities were arrested  and more than Php. 43,000.00 worth of illegal drugs were confiscated.

South Cotabato is the leading province with a large number of arrested persons in violation of illegal drugs.

“The Increasing numbers of the arrested drug personalities is an achievement for PRO 12, In just one (1) week Php. 103,000.00 worth of illegal drugs  and 32 arrest made including a high-vakue target seems to be large number, but more than numbers, our main goal is to put this awless element behind bars s and totally ekiminate the use and proliferation of illegal drug trades.” PBGEN ALFRED S CORPUS stated.