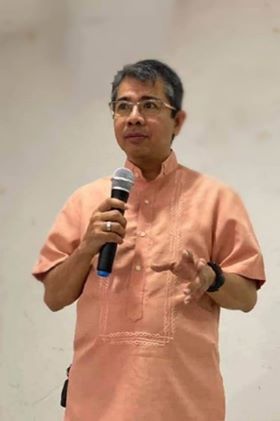 “LET us pray in our own language” announced the facilitator after Reverend Wenzyl V. Dejolde ended his almost 15 minutes of opening prayer before a room of spiritual directors in Ethiopia, South Africa.

And as the spiritual directors uttered their prayers in French, African dialect, and English that when combined began to resemble noise, time started to drag on that made him bored and restless.

“LORD How can I savor the prayer moment with you? I do not know anymore what to say!” Pastor Wenzyl lamented after finishing his own silent prayer.

“Two hours passed and the spiritual directors still continued praying, I was so disturbed from within and I asked, “Lord I do not have anything to say anymore. I can’t hear you. All I can hear is the noise around. And so as I was asking, “Lord what is it that you want me to hear?”

“Then a still small voice I heard (ordering me) to open my scripture in Psalms 46:10 which immediately I opened the Bible and read: “Be still, know that I am God…”

Still, Pastor Wenzyl continued with his lament, “Lord I have been still, I have been sitting here, I have been quiet, I do not know what to say and people are still praying, talking, and listening to you. I have nothing to say anymore.”

But the scripture keeps on ringing as if reminding him to stay calm.

In Pastor Wenzyl’s experience, he was feeling the need, the longing for God amidst the noise of the moment. He can only resign with a sigh from the heart other than his formal utterance of “Lord I do not have anything to say anymore.”

Suddenly, the Spirit steps in and carries Pastor Wenzyl’s unsaid groaning. Then he hears a small voice ordering him to open his Bible in Psalms 46:10 which immediately he opened and read:

At this very moment, the Holy Spirit interceded and creates a connection from himself to God and provides the content of their communication. The Holy Spirit is now praying to God for Pastor Wenzyl.

There is a common misconception that stillness means “silence” and this is simply not the case.

The quest for silence, in the meditative sense, is simply an attempt to separate one’s self from one of the six senses, as if the absence of sound will bring about enlightenment. Again, this is simply not the case.

As Pastor Wenzyl learned, “That despite identifying those things and putting it off, all the noises…but again I was not still.” The key, therefore, is simply not to cut off anything.

Just allow the thoughts, the sounds and so forth to be what they are while you maintain you stillness of mind. By practicing stillness in everyday activity we begin to see the complex interrelationships of our life while not becoming caught up in all of them. When Pastor Wenzyl saw spiritual directors whose discordant prayers almost drowned the room with noise, remember that their minds is still, not silent, and yet their praying is fluid, accurate, and powerful.

And true to Pastor Wenzyl’s testimony he said, “Then only then did I realize that God was revealing all the noises, not just around but from within. That’s when I realized that God was talking. Talking because He was revealing something from within, and going back to the Scripture and He was saying “Be still and know that I am God.” Reverend Wenzyl V. Dejolde soon on our Facebook page.