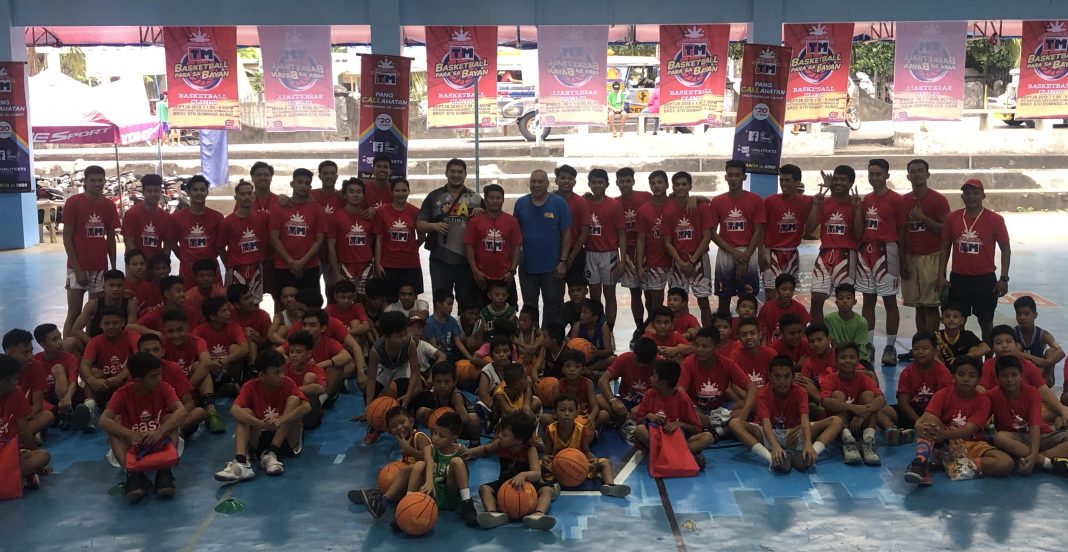 After its successful events in Albay and Cebu, the Republika ng TM Sports Para sa Bayan will move to Panglao in Bohol  to bring its highly-anticipated basketball clinics on October 20.

Globe in partnership with Community Basketball Association (CBA), a regional-based basketball group that champions the development of the sport  in the grassroots level all over the country, held the TM Sports Para sa Bayan event in Sto. Domingo in Albay and Lapu-Lapu City in Cebu recently. The two activities drew the participation of hundreds of budding players and fans for two weekends of learning the rudiments of the most popular game in the country.

Along with  top officials of CBA, some volunteer players from the University of Sto. Tomas and top notch colleges and universities  in Cebu, more than two hundred kids showed up in the clinics. And despite the unpredictable weather conditions, the participants played their hearts out during the two day sessions.

“We were very surprised with the Albay turnout because so many kids wanted to be part of it. We also didn’t anticipate that some participants were a little bit older than the usual kids who show up in our previous events.  It only goes to show that when it comes to learning the game of basketball, there is no age limit and shortage of aspiring basketball players who dream of playing for the country or to the professional leagues someday. The kids are very fortunate that we have Globe as a strong partner in this project,” Carlo Maceda, director of CBA, says.

Participants received important sessions on how to further improve their skills such as dribbling, passing, shooting and defending They also learned the value of playing as a team and how to improve their stamina, physically and mentally.

“We all know that Cebu is one of the hotbeds of basketball in the country. It has produced so outstanding basketball players who have played for the country and in the Philippine Basketball Association including the reigning league Most Valuable Player (MVP)  for the last five years June Mar Fajardo. But just the same, we were overwhelmed with the enthusiasm and discipline of the kids who joined the clinics,” Miguel Bermundo, Head for Citizenship and Advocacy Marketing for Globe, adds.

Organizers are  looking forward to more participants in the Bohol leg that will be conducted at the Panglao Cultural Centre in Poblacion, Panglao from 1-5pm.  Plans are also in the works to bring the basketball clinics Masbate in the next few weeks.

The TM Sports Para sa Bayan aims to provide underprivileged kids, especially out-of-school-youths, the basic skills and tools for the games they love such as basketball, football and volleyball. Aside from learning the basics of the game, the program also teaches kids the value of education, discipline, camaraderie and sportsmanship through team sports. The program also helps in the search and development of potential players that can play in different colleges and universities in Manila through athletic scholarships.